Bob Dylan found the words for this summer, ‘the times they are a changin’.

George Floyd’s death at the hands of the Police has led to women and men in every state of the United States to shout loudly from their knees that ‘Black Lives Matter‘. This is creating waves right to the White House. The President is now well behind in the election polls after holding a comfortable lead.  Even the deadly C-19 virus is not deterring black and whites taking to the streets on every continent.  The Mercedes Formula 1 team is going to switch car colour to black for this years F1 races.  It feels as though this may be a opportunity for a significant shift, as laws are being amended and statues removed.  Music is playing a valuable part as the old protest songs are being considered afresh in light of raised awareness and deep hope for lasting change.

This song filmed below features some of the great voices of the last generation as the late Solomon King, creates harmony with the Blind Boys of Alabama.  These five time Grammy winners from Alabama were founded in 1939 in Talladega.  They have featuring a changing group of singers cross the decades, the majority of whom are visually impaired.

This simple song, ‘None of us are free’  links listeners back to the whole story of oppression of blacks in the United States and to the answer – being free in ‘body, heart and mind’. 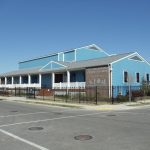 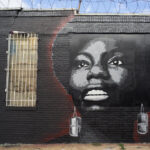