Professor Henry Louis Gates is a hugely influential academic in America. He has introduced a new series describing the role of the Black Church in influencing music and culture.

Available on Utube, with interviews of Oprah, Dr Cornel West and many others who have helped to shape church, music and society.

Here is a short introductory film.

The image used was from Commons “Henry Louis Gates, Jr, Alphonse Fletcher University professor and director of the Hutchins Center for African and African American Research at Harvard University.” by BrookingsInst is licensed under CC BY-NC-ND 2.0

Cellos and Covid 19 Adagio for Strings 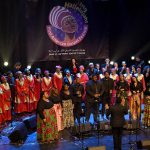 A marvellous gospel choir warm up