What do you recall of Paul Robeson? He is best remembered today for his his peerless version of ‘Old Man River’, written for him, but there is much more to this man. He played ‘Joe’ in the musical ‘Showboat’ in London in 1928 to huge acclaim, then sang that song everywhere. However, he began changing the lyrics after 1938 to reflect his more radical and racially conscious views. Singing, “I must keep fighting until I’m dying, but Old Man River he just keeps rollin’ along,” turned it from a song of passivity into one of defiance.

This was his settled stance for he supported Welsh miners and the Spanish Civil War saying, “I shall take my voice wherever there are those who want to hear the melody of freedom or the words that might inspire hope and courage in the face of fear. My weapons are peaceful, for it is only by peace that peace can be attained. The song of freedom must prevail.“

He played football professionally for three years in the American Professional Football League 1920-1922, twice named All-American Football Player. The third black person to attend Rutgers University, he captained their debating team. Robeson was an able linguist with well over 12 languages to his credit, becoming a law graduate of Columbia University.

In 1942, said he wouldn’t make any more films until there were better roles for blacks. In its era, his “Othello” could not be filmed because of the racial climate – a black man could not play a love scene with a white woman in a motion picture in the 1940s. In addition, Robeson was blacklisted for his political beliefs in 1950, and as a result, was not able to make any films in the U.S., or have any of his films shown in the U.S.

He appreciated the lack of racism in the Soviet Union and was awarded the 1953 Stalin Peace Prize. He was eventually elected into the 2008 New Jersey Hall of Fame for his contributions .

When he stayed in London, Paul was summoned for a Royal Command Performance and befriended by MP’s. However, an incident at the Savoy Grill, in which he was refused seating turned into one of the key moments in his journey to becoming an activist. He later stated, “The artist must take sides. He must elect to fight for freedom or slavery. I have made my choice.” After the lynching of four African Americans,  another four of the 1,000s of men and women crucified in this way. Robeson met with President Truman. Truman terminated the meeting, declaring the time was not right to propose anti-lynching legislation, so Robeson founded the American Crusade Against Lynching in 1946.

One incident, described by his son, reveals Robson’s vulnerability and courage.   In 1949 he was due to give an open air concert near New York.  There was an anti-Robeson riot. His fans were beaten up by thugs. Security forces flushed the area and uncovered two snipers hiding. Robeson firmly believed that those gathered should not be disappointed and so he sang surrounded by 12 unarmed volunteers acted as his human shield. The helicopters deployed by the security forces helicopter swooped low to try drown out his singing.

The US government denied Robeson a passport to travel abroad due to, “his frequent criticism of the treatment of blacks in the United States should not be aired in foreign countries“

A British music critic, after hearing Paul Robeson, sing spirituals, said: “He broke our hearts with beauty.”  Paul himself drew profound inspiration from the spirituals.  “When I sing my spirituals, in which is the whole history of my race, it is then, more than at any other time, that I am liable to be carried away, and feel and know that God exists.

His father was William Robeson, a minister. His mother was Maria Louisa Robeson (Bustill) who died in a fire when Paul was just five years old.

This short clip of a Spiritual reveals the depth and quality of his voice. 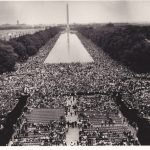 The Greatest Concert in the World Ever 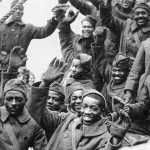