What gives songwriters the motivation to put pen to paper?

A Musketeer: This autumn Barbra Streisand recorded her first new music since 2005, ‘Don’t Lie to Me’.  The 76-year-old said: “After the [presidential] election I became mortified and terrified. And so I had to use my creative energy, I had to put it somewhere.” “Every morning I literally was afraid to turn on the news,” she added. “I’m fired up – I have to write about it.” 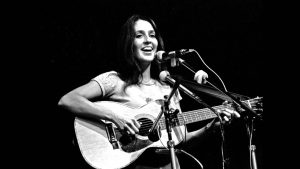 Another Musketeer: Last year, Joan Baez, born in 1941, confirmed that she was writing her first song in 25 years, ‘Nasty Man’, about President Trump. The singer renowned for her resistance music said: “There’s not enough [protest music] right now. There needs to be more. It’s terribly important, because that’s what keeps the spirit.” She should know…

Her performance of  ‘We Shall Overcome’, at the important Washington March in 1963 where Martin Luther King delivered his ‘I have a dream’ speech,  linked her to the civil rights movement.  Baez performed at Woodstock and has displayed a lifelong commitment to activism in the fields of non-violence, human rights, as well as environmental issues.

A Third Musketeer: Carole King has come out of retirement. She has written her first new music in seven years, a reworked version of One, a song from an earlier album. It features a new final verse, which King said is a ‘call to action’ ahead of the mid-term elections in the US. The 76-year-old initially rewrote the song, then recorded the new version to “empower people”.  The new verse features lyrics speaking to prospective politicians. Carole said of the song in an interview, “I see it as empowering people who feel hopeless to do whatever they can as one person. If nothing else, they can vote and change the climate of our country.” She also said, “It’s a song about wondering what we can do when we see injustice, and it expresses my long held belief that we – all of us humans – are most effective when we come together as “One” and stand up for our values such as dignity, inclusivity, equality of opportunity, and caring for our most vulnerable neighbors.”

These three musketeers all know the pen is mightier that the sword and songs can reach more hearts than poetry or prose.

Watch Carole recording One  with her daughters on backing vocals.

Elvis Presley in black and white
Beethoven rolls over