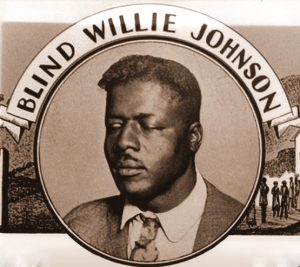 Blind Willie Johnson, an influential early blues singer was born just before the 20th century began.  His thirty recordings were cut in just three years. They display a powerful combination of ‘chest’ singing,  slide guitar skills, offered with an originality that had an impact on later musicians. Bob Dylan, Led Zeppelin and Eric Clapton have covered his work.

Johnson was born in Texas into a poor family. His mother dying when he was four.  The influence of attending church fuelled a desire to become a minister.  When we was five, his father gave him a guitar.

Johnson was not born blind.  The story goes he was blinded by his stepmother during a family argument when seven years old.  This scuppered his chance to become a cleric; however his songs reflect his beliefs.  One of the most famous is The Soul of a Man;  it reveals the raw power in his voice,  clever guitar skills plus the directness of a busker encouraging loose change from reluctant passers-by.

Blind Willie died in 1945.  Fire destroyed his home; with nowhere to go Johnson continued to live in the ruins of this house. He caught a fever, no hospital would admit him and his life ended sadly.

The Final Frontier is crossed

What are the chances of this bluesman being remembered in a thousand years time?  Very good actually because Johnston was chosen by Carl Sagan’s team to be on the famous ‘golden record’ launched on both Voyager space craft, in 1977.

Sagan, the cosmologist, published numerous scientific papers and books. The golden records are literally gold plated, have 27 tracks of music and greetings from this planet, including one from President Carter. They are designed to be played on the record player which is provided on each space craft by any intelligent life form encountered.

The Voyager space craft are hurtling through the universe at 35,000 mph, having visited Jupiter, Saturn, Neptune and Uranus. They are still in communication with Earth, though it will take around 40,000 years to reach the closest star. NASA is asking today is there life on Mars? Blind Willie reminds us music influences beyond our wildest imaginings?

Does Blind Willie’s contribution surprise you as much as it would surprise him?

Listen to The Soul of a Man by Blind Willie?

Singing- How did it begin?
Silent Night is making a beautiful noise